The internet consists of individual machines(hosts and routers), and the communication infrastructure that connects them|Role Of Data Link Layer On the Internet|

LANs are widely used for interconnection within a single building, but most of the wide-area infrastructure is built up from point to point leased lines|Role Of Data Link Layer On the Internet|

Point to point communication is primarily used in two situations. First, thousands of organizations have one or more LANs, each with some number of hosts(personal computers, user workstations, servers, and so on) along with a router(or a bridge, which is functionally similar)|Role Of Data Link Layer On the Internet|

Often, the routers are interconnected by a backbone LAN. Typically, all connections to the outside world go through one or two routers that have point-to-point leased lines to distant routers. It is these routers and their leased lines that make up the communication subnets on which the internet is built.

The second situation where point-to-point lines play a major role on the internet is the millions of individuals who have home connections to the internet using modems and dial-up telephone lines.

Usually, what happens is that the user’s home PC calls up an internet provider, which includes commercial companies like America Online, CompuServe, and the Microsoft network, but also many universities and companies that provide home internet connectivity to their students and employees.

In this mode, the user can type commands and run programs, but graphical internet services, such as the World Wide Web, are not available. This way of working is called having a shell account.

Alternatively, the home PC can call an internet service provider’s router and then act like a full-blown internet host.

This method of operation is no different than having a leased line between the PC and the routers, except that the connection is terminated when the user ends the session.

For both the router-router leased line connection and dial-up host-router connection, some point-to-point data link protocol is required on the line for framing, error control, and the other data link layer functions. Two such protocols are widely used on the internet, SLIP, and PPP.

What are the five duties of the data link layer?

What are data link layer protocols?

Hope! you would have enjoyed this post about the Role Of the Data Link Layer On the Internet. 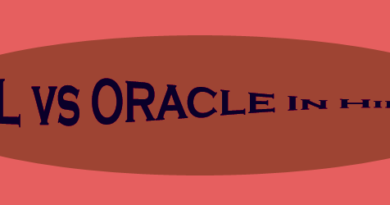 SQL vs ORACLE In Hindi?