What are the design issues of the network layer?

There are many design issues with the network layer which are listed below:

What are the issues with the network layer?

The main issue for the network layer is the quality of service that it provides, and the other main issues are congestion control.

If there are too many packets are present in the subnet at the same time then they may try to get into one another way, and thus this can create the problem of a bottleneck.

What are the responsibilities of the network layer?

The main work or responsibility of the network layer is routing and delivering the data packets from source to destination over the network with the optimal path. It also translates the addresses of the message and changes the logical address into a physical address, say it changes the IP address to a MAC address.

What is the difference between IPv4 and IPv6?

The basic design issue of the network layer includes the services provided to the transport layer, routing of packets through the subnet, congestion control, and connection of multiple networks together(internetworking).

Carrier often consists of the control of the protocols and interface up to including the network layer. its function is to deliver packets given to it by its customers.

Due to this reason, this interface must be especially well defined. Network layer services have been designed with the following goals-

The transport layer should be shielded from the number, type, and topology of the routers present.

Services should be independent of the router technology.

Network addresses made available to the transport layer should use a uniform numbering plan, even across LANs and WANs.

With these goals, designers of the network layer have a lot of freedom in writing detailed specifications of the services to be provided to the transport layer.

This freedom degenerates into a raging battle between two warring factions. The center of the discussion is, whether the network layer should provide connectionless service or connection-oriented service.

One camp (represented by the international community), argues that the router’s job is moving packets around and nothing else. According to them, the subnet is inherently unreliable, no matter how it is designed.

Thus, the hosts should accept the fact that the network is unreliable and perform error control and flow control themselves.

This thinking leads quickly to the conclusion that the network service should be connectionless, with primitives SEND PACKET and RECEIVE PACKET and little else.

Particularly no packet ordering and flow control should be done, since the hosts are going to do that anyway, and there is usually little to be gained by doing it twice.

In addition, each packet must carry the full destination address, because each packet transmitted is carried independently of its predecessors, if any.

But, it is interesting to notice that as the quality of service guarantees is becoming more and more important, the internet is evolving.

Hope! you would have enjoyed this post about ‘the design issue of the network layer. 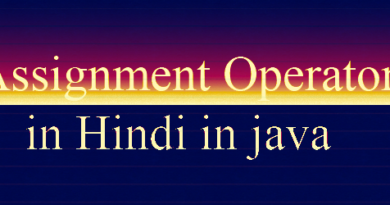 Assignment Operator in Hindi in java?