In this tutorial, I am going to explain one of the methods of dynamic memory management which is the name compaction. In this process, all marked or used node is shifted to one end and variable or available memory is kept at another end.

Inside this blog post, we will explore What is compaction in memory management? What is a compaction technique? What is dynamic memory fragmentation? What is storage compaction in data structure?.

In a very simple language, compaction is a process in which we mode all the used nodes to the one end of the memory and all the available memory to the other end. And the algorithm to perform such an operation is called the compaction algorithm.

In this scheme initially, memory is one large block of available storage. When requests arrive for storage, a block of memory is allocated sequentially starting from the first location in the memory as shown in Fig1.

A variable free point contains the address of the first location following the last block allocated as in Fig1, a free point equals 950. When a block is freed, the free point remains unchanged and no combination of free spaces takes place.

At that point, user routines come to a halt and the system compaction routine is called. this routine copies all allocated blocks into sequential memory locations starting from the lowest address in the memory.

Thus, one large free block is created at the upper end of the memory and the user request may be filled if there is sufficient storage available. this process is shown in Fig1 on a memory of 1024 words.

When allocated blocks are copied into a lower portion of memory, special care must be taken so that the pointer value remains correct.

Memory compaction is the process to shift all the free memory at one end and used or marked node at one end so that when a request memory is less than the size of free pool memory then we can easily allocate the memory to that block.

Hope! you would have enjoyed this post about memory compaction. 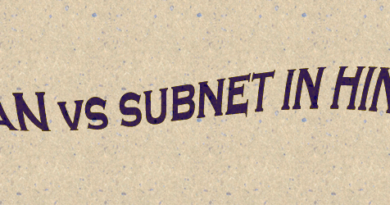 VLAN vs Subnet In Hindi?