In this blog post, I am going to discuss the recursion process which you would have learned in a data structure. I will also discuss the difference in recursion vs iteration.

What is recursion with an example?

Recursion is the process of self iteration in reverse order. Recursion is considered the most powerful tool in the programming language.

Recursion is defined as defining anything in terms of itself. If any problem has multiple executions then recursion is the best choice to solve such a problem in reverse order.

It is a great help to the programmer using iteration so that they can easily carry out a certain task a number of known times or until the desired condition gets true. Recursion works as an alternative to iteration to execute a function repeatedly.

In the programing language, a function is called recursive if it calls itself. However, the recursion call could be conditional or unconditional.

If there is an unconditional call of a function then no function after being called would ever be able to return and an infinite sequence of calls to the same function will be produced. such function will not terminate.

Usually, a recursive function is used with a call to condition, so as to terminate the particular function recursive call does not prove to be more efficient, rather an equivalent non-recursive is preferred more because of reasons related to performance.

So ultimately recursion is the process where a large program is divided into small segments and then each of its instances gets solved using the recursion process and then we assemble all to make the final solution of the problem.

The first part of this function indicates the primary case or sometimes called a safety case and is used to prevent the script from running for infinite time or forever. thus returns the value 1 whenever a value is 1 or less is passed in the function.

The second part is the main part and is kept for the recursion process. the same method is being called with a slight change in a parameter which is decrement by 1 in each step and multiplied the result with our copy of n.

Recursion vs Iteration: What is the difference between Iteration and Recursion?

The difference between recursion and iteration is given below in table form.

Recursion is the process to call itself in reverse order. The recursion process is a better option for large recursive problems where it can reduce the function overhead and also the size of executing code to get the final result of the problem. Whereas iteration is the execution of some set of a statement in a program for performing a specific action. Iteration is best for solving small problems as it will be more efficient in terms of memory usage and execution speed.

Hope! you would have enjoyed this post about Recursion and recursion vs iteration. 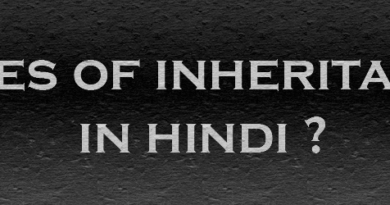 Types Of Inheritance In Hindi?|

Personalized Email: How to personalize an email with a name? / What is personalized email marketing / How do I Personalise my email?